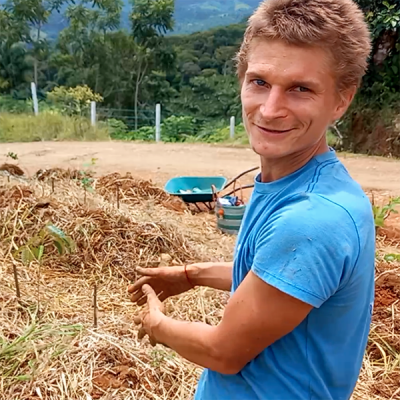 Director of Free the Food

Arthur “Ara” Favrot was born and raised in France. In 2013, he relocated to Costa Rica and began his journey exploring health-conscious communities. After eight years of practicing permaculture, he discovered syntropic agriculture, a method of farming that integrates natural processes and the regeneration of ecosystems. As he learned more, he realized he would never design “gardens” the same way he did before.

Ara found that very few people knew about this approach, so he became really inspired to share it. He and a few friends began planting along roadsides, following the principles of syntropic farming, to provide access to free food for their local community. They called this project “Free the Food”.

Rather than creating their own not-for-profit entity, they decided to cooperate with existing organizations that share the same regenerative objectives, such as the Perma Vida Foundation. These allies organize teams of volunteers for each street or area to be cultivated.

Each planting team includes a trained guide who follows Free the Food protocols and documents their progress online, sharing photos and updates to attract moral and financial support. This helps ensure that these newly-established syntropic “lines” along the streets will be properly installed and well-maintained.

They also include signage indicating that the food is free to forage, explaining how syntropic agriculture works, mentioning the website so people can learn more about it, and giving credit to the specific team who is responsible. With Ara, we are excited to co-create thriving communities worldwide!